March is a key point in the calendar when it comes to charity awareness months as it is dedicated to both prostate and ovarian cancer. In the UK over 44,000 men are affected with prostate cancer per year, while one in every 54 women develop ovarian cancer. Both diseases typically affect men and women over 50 years, with the risk increasing with age. A family history of ovarian or prostate cancer is also a significant risk factor. 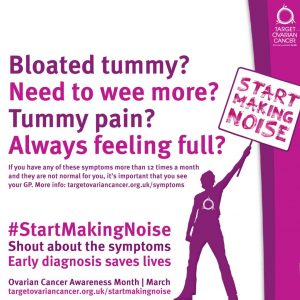 Ovarian Cancer Awareness Month runs throughout March and charities are gearing up to draw attention to the disease while raising vital funds for research and support services. Over 7,000 women are diagnosed with ovarian cancer every year in the UK, around 135 a week. If diagnosed early, the five year survival rate doubles from just 46 per cent to more than 90 per cent. Raising awareness of symptom and early detection is high on the agenda for all charities as a result. ProstateUK and Target Ovarian Cancer UK are leading the charge in tackling these insidious diseases, with a focus on early detection and treatment during entire month of March. Symptoms of prostate cancer include the need to frequently urinate and severe pain and/or the presence of blood when urinating or ejaculating. Symptoms of ovarian cancer also include the need to frequently urinate as well as pelvic/abdominal pain, bloating and difficulty eating. While prostate cancer is non-fatal in most cases, the disparity between prostate cancer awareness, funding and research compared to other more life threatening diseases mean that outcomes for prostate cancers are often poor in comparison. The longer symptoms are ignored and treatment or management is delayed, the greater the risk to life. Black men are far more likely to contract prostate cancer, with one in four affected at some point in their lives. Only three per cent of women are very confident of spotting a symptom of ovarian cancer, with 7000 women diagnosed per year. Survival rates are typically much lower than other cancers, as it is often detected at a very late stage after which it has spread to other parts of the body. Throughout the month of March both Prostate UK and Target Ovarian Cancer UK are organising a number of fundraising and awareness events. Visit their respective websites for more information. Click the links below for more information about prostate and ovarian cancer: